The time we asked Ben, of ‘Mr Ben and the Bens’… Who’s Jenny Jones? 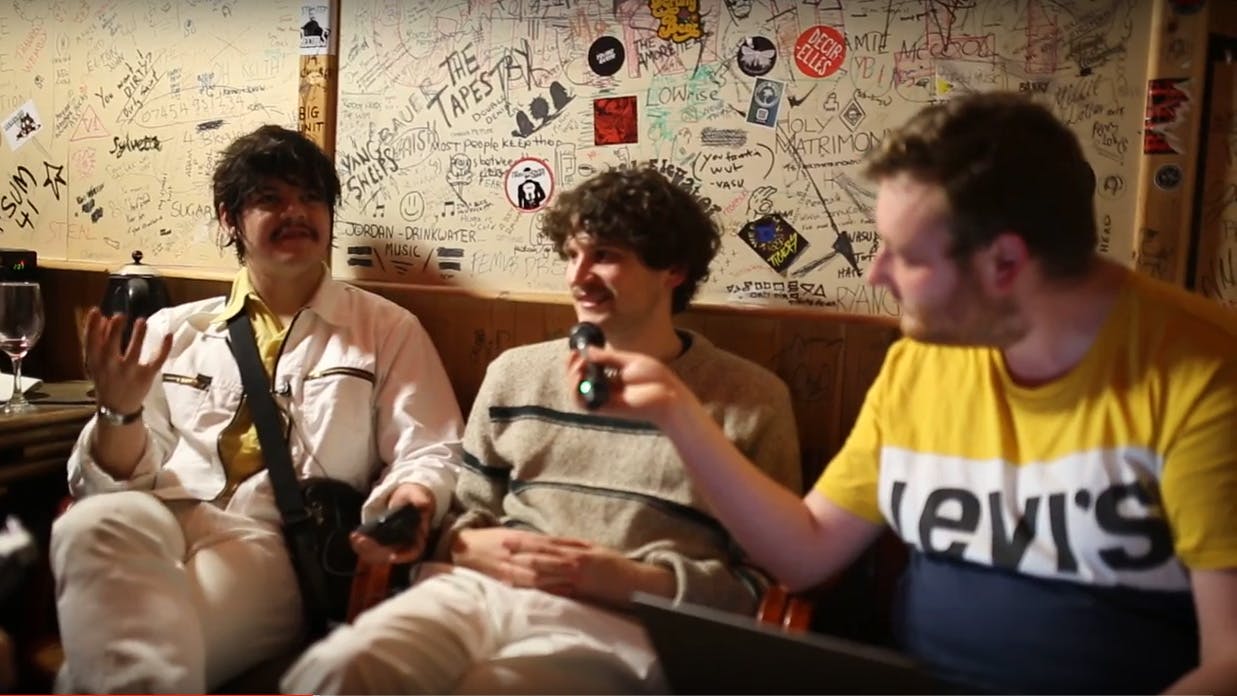 After the Manchester leg of their recent “Who knows Jenny Jones?” tour, we at Suck It & Spin caught up with Ben and Zach, of ‘Mr Ben & The Bens’ to talk band names, rock operas, their latest album and how the tour was going.

Check out the transcription below, or you can listen to the full version on Episode 2 of the Suck It & Spin podcast….

Rob: So yeah we’re sat here in Gullivers, backstage in a wonderful little venue, loads of graffitti knocking about, with Zach and Ben from Mr Ben and the Ben’s! How are you guys doing?

Rob: That mic will work don’t worry! Yeah so, we’ve just watched you pretty sell out Gullivers, play on a Tuesday night, amazing set! How did you guys find it?

Zach: Yeah good fun!
Ben: Yeah that was my favourite one of the tour so far!

Rob: Favourite one if the tour? Third one in?

Rob: Decent, so what have you got coming up next, what are the next few dates for you?

Ben: We’re going to Nottingham tomorrow…
Zach: And then Cardiff, London and then Sheffield!

Ben: It’s about 90, it’s not that much smaller than here [Gulliivers] but…
Zach: It feels tiny, it’s like an old shop front – feels really tiny!

Rob: Nice, good stuff! So, we’ve obviously listened to all the album, we love it, my personal favourite tracks are ‘Transmissions’ and ‘The Edge of a Cloud’ really enjoyed that. The question on Suck It And Spin’s mind really is “Who is Jenny Jones?”

Ben: Jenny Jones is a fictional character from 1979 in Sheffield and she kind of a shrinking violet, she doesn’t have very many friends. But then, she abducted by aliens and they teach her about disco music, then she gets beamed back down to Earth… the she spends the night being the talk of the town, but then the world ends! So its kind of a dystopian future set around this protagonist.

Rob: I googled that today… right? And I read online that Jenny Jones is a shrinking violent… from an area of Sheffield! And I was reading it and I got it down and was like… na someone’s bullshitting me here!

Ben: No it’s very true! I it’s  some kind of sports person also called Jenny Jones, like quite a famous hockey player or something so…

Rob: Macca, do you know anything about Jenny Jones?
Macca: Everything! (Laughs)
Rob: Cool, fair enough! So, yeah obviously we love the album, I’ve been following you since the first EP’s. how do you think things have developed from that first EP, I think it was the Happy Shopper EP(?), to now, writing the full album, getting it produced etc?

Ben: Yeah, just kind of money really! Just the record label has a little bit more money so…
(Laughs)
Zach: The process isn’t any different, I don’t think…
Ben: Yeah it’s the same isn’t it?
Zach: Yeah Ben just did it all in his room…

Zach: This time we did like pay o go and hire a room to do the drums in and paid a friend to mix it but that was the only difference.
Ben: Yeah I guess it was like paying someone to mix it to make it cohesive becasue I think the stems I made were all over the place. Then we did all the drums in one day, so it was kind of a similar process but it was just the record label had a little bit more money, so we could make coloured vinyl and have like matte printed sleeves
Zach: And it comes shrinkwrapped!

Rob: Decent, decent! (Laughs) Obviously we’ll be buying a copy, well, I will anyway… but the thing we like to ask artists is what has been inspiring you during the writing process, what artists have you been listening to, have you seen any bands live since you been writing it and been like, wow… has anyone inspired all of you really for the writing and recording?

Rob: Like ‘The Streets – A Grand Don’t Come For Free’ ha – one of Macca’s favourite albums! (Laughs) We’ve obviously been listening to it, we love it… if you could take anyone on tour with you at the moment, sort of any artist, past, present, if you were supporting, or if you were to headline… who would it be? To the both of you, as Mr Ben and the Ben’s and as Sun Drift…
Jacob: It can be anyone… anyone from the whole time line of music, going back to Mozart…

Ben: I’d have like to have supported ‘Super Fury Animals’ because I watched their tour video and they looked like really cool people… but I wouldn’t have got baked because I don’t smoke weed so… (laughs) They seem to like hotbox their buses and stuff, but there was also I think at the front of the bus they had a sort of “sober area”

Rob: I went to watch them once, they supported Oasis, and they sung exclusively in Welsh.

Ben: Yeah, they do do Welsh only sets!
Zach: I saw them at Green Man, yeah!

Jacob: Were they speaking Welsh then?

Zach: Yeah I had no idea what they were saying!

Rob: Zach, have you got anyone, other than the Super Fury Animals?

Rob: Perfect, well what we’re going to do now is throw over to MrBen and the Ben’s, we’re going to play ‘Transmissions’, the latest single from the new album and then we’ll have a few quick fire questions for when we get back, Cheers!

Check out ‘Transmissions’ below. Or, to hear the full interview, including the quick fire questions, check out Episode 2 of the Suck It & Spin podcast on our podcasts page, or you can find it on Spotify or iTunes too!